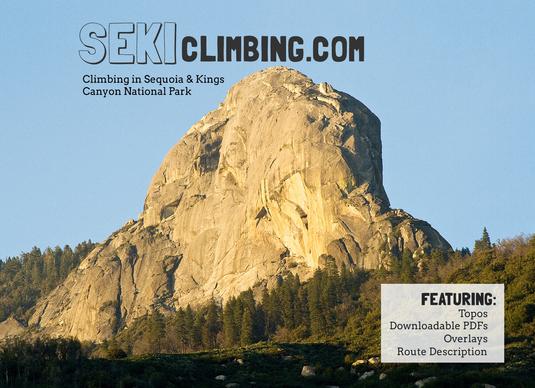 Here's the deal:  I gather info and draw topos for my favorite place on earth and you use them for free.  If you want to take them for personal use just look for the "Download PDF" button at the bottom of most pages.  No guarantee they're accurate!

Please email me any edits, comments, additions or trip planning questions you may have and check back regularly for updates.  Everything has been created to fit regular printer paper or full computer screens so you may have to zoom and pan on other devices, sorry!

*Climbing is dangerous and you shouldn't do it.  If you use this site and then get hurt or die I'm not responsible, I warned you!

Sequoia & Kings Canyon National Park (SEKI) is a land of giants. Near or within it's borders lie the largest trees on earth (Sequoias), the highest mountain in the contiguous United States (Mount Whitney), arguably the deepest river canyon in North America (Kings below Spanish Mountain), the tallest granite dome in the Sierra (Tehipite), the longest cave in California (Lilburn), and steepest river in the United States (Kaweah). Scattered throughout these superlatives are high quality climbing areas where you can enjoy the beauty of these parks in relative solitude.

Lodging, gas and food are limited within the park so it's a good idea to bring what you'll need along with you.  Campgrounds are scattered throughout the park, though many are closed during the winter.  You can camp where you please within Sequoia National Forest, which separates parts of Sequoia from Kings Canyon and borders parts of the General's Highway, but the facilities are limited.  If you wanna get all fancy about it you can stay in Wucksachi Lodge near Lodgepole or Sequoia Monesito Resort near Big Meadows, both of which are open year round and are very nice.  Hume Lake, a private Christian camp, also has lodging, food, gas and a general store.

Please practice Leave No Trace and respect all seasonal closures so we can continue to enjoy SEKI climbing!

The climbing is excellent and a bit more spread out than it's neighbor to the north, Yosemite. Some rocks are virtually roadside with five minute approaches, while other formations will take at least one full day to get to and test the endurance of the strongest legs and lungs. The resulting experience is similar to what the original explorers of the area got to enjoy; solitude. The rocks are mostly composed of solid granite, with some marble and other forms scattered throughout the park. No matter your climbing style there is enough variety for you to find something to enjoy. Dozens of areas offer slab, steep face, big wall, cracks, alpine, and even a bit of sport climbing.

Many of the major formations were first climbed around the same time Yosemite was getting developed, and by some familiar names such as Robbins, Rowell and Beckey. Most of the modern routes were pioneered through the 80's and 90's by a handful of strong climbers including, but not limited to, Herb Laeger, Richard Leversee, Eddie Joe, David Hickey and Jeff Scheuerell.

The only guide for the region, "Southern Sierra Rock Climbing: Sequoia Kings Canyon," is long out of print and costs a pretty penny online. Many routes have been put up by park employees and a few other folks since the book was published in 1993, so some exploring will reveal many more developed routes than most people think. That being said, there are still miles of untouched rock for those willing to earn it.

If you're looking for somewhere to explore, get the wilderness experience, and enjoy some awesome climbing, this is the place to be!

PS: For great history, stories, topos and photos of this and surrounding areas visit these sites: