Hospital Rock picnic area and parking lot are on Highway 198 about 6 miles past the park entrance and just before the turn off for Buckeye Flat campground.  It is well marked.  This is the best access for The Lunchboxes if you walk uphill towards the main wall, which can be partially seen through the trees.

To access the main wall and Lunch Bucket Ledge it is best to drive another 0.4 miles and park in the turnout before the hairpin turn to the right.  Walk up the grassy slopes from there.  For an overview, drive a few more turns and you can get an excellent view of the main wall from your car.

Descend from the main wall by either hiking north along the summit or rappelling Lunch Bucket Ledge (see topo for rap lengths).  Three raps and a bit of down climbing on the first rap with one 60m rope or two raps with double ropes or a 70m rope.

Hospital Rock, as labeled in the visitor’s guide, is a large boulder with Native American pictographs.  It was named after a trapper who became ensnared in his own bear trap and was left in the shelter of the boulder while help was found.  The climbing is actually on a band of quartzite uphill and across the road from the boulder.  In the 1960’s the Sierra Club, under the supervision of the likes of Ax Nelson and Rich Calderwood, would use Hospital Rock as a multipitch training ground.  Since then it has been used in a similar capacity by visitors and park staff alike.

The climbing is quite fun on unique and highly featured quartzite with great views of Moro Rock and Castle Rocks.  The main wall features many two pitch opportunities that are rarely, if ever, harder than 5.9.  Supposedly a pair of climbers started on the north (right) end of the wall and climbed routes to the summit at 10-20 foot intervals all the way across to the left (south) side.  In other words, there aren’t really defined and named routes, it’s more of a “choose your own adventure” area where you will occasionally see old pitons or bolts from early ascents.  Give it a try, it feels like a first ascent!

With that being said, there is one defined route with bolted anchors and new hardware on the main wall.  Lunch Bucket Ledge, 5.8 (many variations) is an excellent introduction to Hospital Rock climbing.  Downhill and climbers left from the main wall there are a series of broken blocks that are popular for top-roping called The Lunchboxes.  This area also has many possibilities on unnamed and unrated rock but you can find some recently assigned names and ratings on mountainproject.com.

5.8  2 pitches  Lunch Bucket Ledge  Takes any gear, bolted anchors
P1  Locate the first two bolt on slab between two small corners, or
climb the corner on the right (easier).  Climb past the rap anchor
and continue up, traversing left on the ledge at the end.
P2  Follow the large left facing corner to the top. 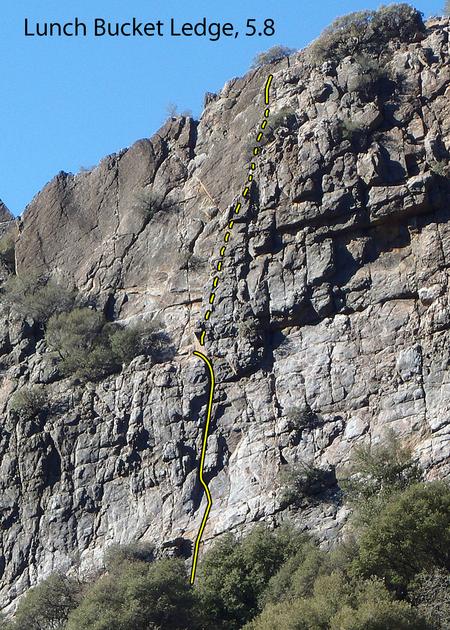